Fascinating cuisine enjoyed at your room

Enjoy dinner at your room where you can relax and feel rested.
For small groups, we may be able to prepare an individual room.
The Kameya Cuisine is our standard meal, and we have our standards high.
That is why the ingredients are carefully selected and the meals are prepared with great care.
On top of that, we have a little trick that lets our guests experience the rich history and culture of the Shonai area.

A traveler’s meal in the Edo Era

Kameya opened the first western style restaurant around Yunohama in the Meiji era.
There are three famous mountains in the Shonan Area. The trainees of Shukendo referred to the first mountain ,the Gassan mountain, as the past: the second mountain, the Haguro Mountain, as the present: the third mountain, the Yudono Mountain, as the future, and the three mountains are famously known as the “Dewasanzan”.
From the early ages, Japanese people loved traveling. In the Edo era, climbing the three mountains were called the “Renaissance” where the travelers hoped to be “born again”, and it became a huge trend.
In the “Renaissance”, the travelers ate Buddhist vegetarian meals before entering the mountain, and enjoyed the relaxing hot spring after climbing it. Eating the glorious meals and the sake that accompanies it was paradise itself.
We recreated the “Renaissance” experience through our Kameya Cuisine.

First off, the Sesame tofu’s Ankake (thick starchy sauce made of kuzu or katakuriko flour).
The reason Shonai is home to many Ankakae cuisines is because it was influenced by Kyoto’s culture.
Furthermore, we offer seasonal meals such as: the boiled Mottenohoka (chrysanthemum vegetable) dish, Karage (sweetened dried ray fins), simmered sweet potatoes, squid tentacles and chives with vinegared miso, etc.
Enjoying the local cuisine that has been handed down through generations is one of the best parts of traveling. 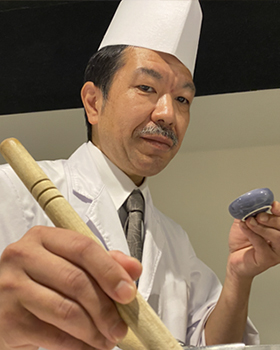 A classical cuisine at a Onsen Ryokan would be served as a Japanese-style set menu meal, and here at Kameya, we do just that. The Kameya Cuisine is THE classical Japanese-style set meal. On top of that, we take things seriously when it comes to providing guests with freshly made meals. Main meals such as the Yamagata Beef, Abalones and red snow crabs are served fresh off the kitchen. The ingredients are carefully selected, and are cooked with great care. We hope you enjoy the gourmet unique to our Shonai area.